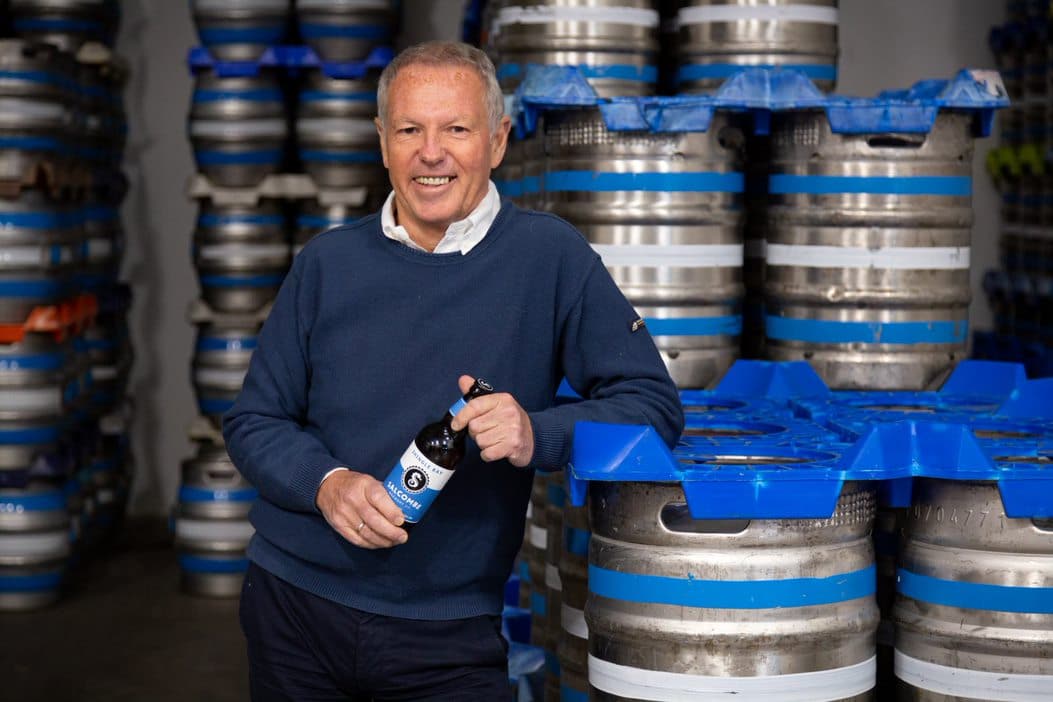 Our founder John recently had a chat with Martin Hesp, journalist and columnist for the Western Morning News, about the Salcombe Brewery story and his passion for the business…..

A lot of people like a drop of beer, but very few end up buying a brewery simply because they’ve enjoyed a pint of their local’s finest. Even more rare is the person who purchases a brewery, then proceeds to take it up several gears so that it expands to create more ales, employ more people and win multiple awards. But this is the intriguing story at Salcombe Brewery, a South Devon business which is set to expand to three times it’s pre-Covid size despite downturns caused by the pandemic.

Salcombe Brewery founder John Tiner is an unassuming man who does not particularly wish to be in the spotlight, but it would be difficult to tell the incredible story of the South West’s fastest expanding brewery without mentioning his name and input. For a start, he really is one of those people who liked a product so much he bought the company.

It was a small brewery with a few problems, and John was a highly successful leader in the world of insurance and finance, in the process of moving down to the South Hams to enjoy a slightly quieter life.  But after being told by a local pub landlord it might be the last pint of Shingle Bay he’d ever enjoy, John popped around to the brewery near Kingsbridge on a fact-finding mission. That same afternoon, without knowing a thing about brewing, he decided to buy the business in a bid to save Shingle Bay and to turn the business around.

What John Tiner – a man used to running large companies with thousands of employees – probably did not realise back in 2011 was the extent to which owning a small brewery would take over his life. Nor, perhaps, did he foresee how enthusiastic and impassioned he would become in helping to run an ever-expanding business employing clever, committed people dedicated to creating and offering a growing range of quality ales.

In some ways the story is reminiscent of our recent article focussing on Quicke’s Cheese, which we described as being a model or benchmark-operation of its kind. In Salcombe Brewery’s case you could put it like this: if you wanted to create a growth business making really good beers and employing an increasing number of motivated and happy people, this would be a very good way of doing it.

“It was a complete accident that we got into this business in 2011 when we were in theprocess of moving our family home from Surrey to Hope Cove in Devon,” John told me when he gave me a tour of the brewery. “We had a pint of Shingle Bay in our local hostelry and I was told by the landlord they were probably going to have to stop stocking it because the brewery was having problems. On the way back to the house afterwards my wife Gerry and I talked about it and thought it would be good to preserve this beer for the community – and so that I could carry on drinking it, apart from anything else.

“Having no experience of the business I went over to visit the brewery (which was called Quercus) and ended up offering to buy it. The proprietor was very happy to agree. To his enormous credit he had created this wonderful beer called Shingle Bay, which is even now our best seller in the bottle.

“I was working full-time and living partly between Devon and somewhere around the world, so we employed a couple of people to run things. To be honest it wasn’t really a fit-for-purpose set-up, but we tried our best to get the business back on its feet over a couple of years – then we decided we wanted to capture the wonderful products Quercus had and put them into a completely new brewery set-up with a larger team and a complete rebrand.”

It was in 2015 that the newly named Salcombe Brewery was launched from its new home in a former Water Board reservoir perched high on a hill overlooking the Salcombe estuary. The property had been a chance purchase (John just happened to be passing by when he spotted a small handwritten For Sale sign) and a happy one, because the large semi-submerged concrete lined reservoir makes a fabulous eco-friendly storage area for beer. “Using its two- foot-six-inch thick walls, we constructed a brewhouse on the top and used the reservoir below to store all of our finished products – basically the ambient temperature below ground creates a natural coolness,” John explained as he showed me around the giant space.

“We bought new brewery equipment and started to brew here in March 2017. All our beer is still brewed here. – but during the first lockdown we decided to take on a second site at Lee Mill on the A38 so we could bring our bottling and canning needs in house, increase our fermenting capacity and significantly improve the efficiency and capacity of our kegging.”

John took me to see Salcombe Brewery’s massive new Lee Mill site and told me: “Thanks to the work we’ve been doing here during the lockdowns, we have increased our capacity by three times. And it has been quite a game-changer for us.”

When he says ‘work’, by the way, John Tiner is talking about rolling up his own sleeves. He spent days at the site painting the walls of the giant new chilled storage area and helping to lay floors, etc…

So who is this bloke who came down to Devon and found himself running one of the most successful new companies in the area?

John tells a funny but sad story about wanting to become a pilot when he was young, only to fail at the last hurdle when he took an eye test. He went home hugely disappointed only to have his father suggest he become an accountant. “That’s great isn’t it – from fighter pilot to accountant!” John laughs.

“But this was the Seventies and times were quite hard. There was a lot of unemployment, but there’s always a lot of reasons for accountants to be around.”

So John duly took his father’s advice and “did rather well at it”, to put it in his own modest words.  A quarter of a century later he’d reached the top of the global services business where he’d worked for years and left to set up, as chief executive, the new financial regulator (the FSA) established by the Blair-Brown Government. After six years of that, he went on to help create a large life-insurance company called Resolution, he was on the board of Credit Suisse for 12 years, and is still chairman of the UK’s largest independent insurance broker, the Ardonagh Group.

“The thing that binds these things together is the people,” he told me. “I love working with the people at Ardonagh – creative, entrepreneurial, driven, kind – and really just the sort of people you want to go down the pub with. Which is just like the people at the brewery. They are a fantastic team! That is why it’s worth getting up in the morning…”

I asked if there were similarities between running a large company and a small new business.

“I thought so, early on. Massive mistake. The one thing you realise when you are setting up or running a small business is that you do not have all the infrastructure you have with a large business. You have to do everything yourself. It took me a while to learn that. But I have learned more in the journey of the Salcombe Brewery than in any other job I’ve had.

“One thing is: we are making something which people really want to buy. They enjoy it, lookforward to it, plan their Saturday night around having a pint… No one gets excited on a Saturday morning thinking: ‘Oh gee, let’s go and open a bank account today – let’s buy an insurance policy’. It’s all vitally necessary of course, but nobody really loves to do it – whereas people want to engage with this industry.

“We live in the most spectacular environment here,” added John, looking out of the window of the brewery tap-room towards the distant glinting Salcombe estuary. “So I think it’s important we play to all of that in terms of brewing and everything we do. It must be in support of the environment and in support of the community.”

The brewery contributes funds to the Seahorse Trust to help a rare species in the estuary and it also supports the Devon Environmental Foundation and the local RNLI. “We want to be there to serve the community. Our team of about 20 people see this as a sort of corporate family – everyone is passionate about this business and doing it the right way,” says John.

“People come to visit South Devon because they want to enjoy the environment and they want to enjoy things that go with the environment. They want to eat local Sharpham Cheese, drink Salcombe beer, buy local Hattier’s Rum for the evenings. Our thinking is that they can enjoy that environment when they are not here – we take the local beer to them wherever they live when they are not here. So on a dark winter’s night they can have a pint of their favourite Salcombe beer which will remind them of the good times they have in summer.”

I asked John what his high-flying colleagues in the corporate world think of his brewery role – does he, for example, take a few pints with him when he attends board meetings?

“Indeed I do! And I’ll tell you what – I’ve been to some of these networking events with captains of industry and you say at the beginning what you do – and I always start off by saying: ‘Well, I own a brewery’. And honestly, whatever the topic for that event, suddenly the whole conversation is about brewing and beer. It is a great, disarming, topic which brings people back to earth.

Salcombe Brewery really will be reaching parts others might fail to reach thanks to a new range of small batch beers – the first of which, a new Belgian pale ale called Belgica, has just won a prestigious Gold Award at the Society of Independent Brewers – SIBA MaltingsFest. Belgica also picked up a Bronze in the Overall Winner of the Cask Beer Competition.

And talking of reaching other parts, Salcombe Brewery has recently partnered up with Devon chef Mitch Tonks to brew the beer for his popular Rockfish chain of restaurants.